Unlocking the Potential of the Jones Falls Valley Corridor

Editor's Note:This week's blog post comes from New Hampshire architect and urban designer Marc Szarkowski. Marc is a recent graduate of Rensselaer Polytechnic Institute (RPI), and has been an astute observer of Baltimore's urban landscape. His keen insights provide an updated and compelling look at a concept that has been discussed and studied for years: removing the elevated portion of the JFX and unlocking the full potential of the Jones Falls Valley.
by Marc Szarkowski
Guest Blogger 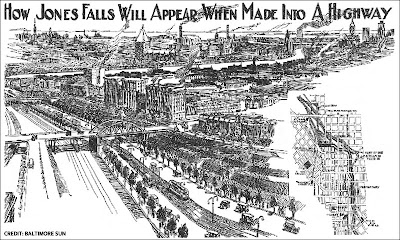 The Jones Falls has always been a barrier – useful at times, a nuisance at others. The Falls was a fortuitous firebreak in the fire of 1904, but in 1915 it was partially buried under the Fallsway. In 1962 the Jones Falls Expressway (JFX) was routed along the Falls and built atop the Fallsway, further cementing the Falls' reputation as a barrier.


Today the desolate corridor physically and psychologically separates various neighborhoods with a repellent no-man’s-land of railroad tracks, overgrown slopes, drab bridges, noisy sunken highway lanes, gloomy elevated highway decks, and decrepit warehouses. The JFX provides a convenient route into/out of town and a portion of its elevated deck serves as a shelter for a thriving farmer's market, but is it worth maintaining a wall around downtown Baltimore just for that?
DISCONNECTED IDEAS
Baltimoreans have been talking about rebuilding the Jones Falls since the 1800s. The fact that this discussion persists today tells us that none of the rebuilds that have arrived over the years – the Fallsway, the JFX, the President Street extension – have been satisfactory. There have been calls to tear down the elevated part of the JFX and replace it with a boulevard, to extend the Jones Falls Trail to the Inner Harbor by following the JFX, and so on. There are also ideas to redo other transportation corridors that pass over or feed into the JFX - to redo the rat's maze of highways that cut Druid Hill Park off from Reservoir Hill or to rebuild Charles Street to accommodate a streetcar line, for example.
I think these ideas could be merged into a unified, multiform vision that could address many goals concurrently - dissolving the JFX barrier, connecting uptown, midtown, and downtown Baltimore, improving access to Druid Hill Park, providing an extended bike trail, and providing more residential space in Midtown. I think this would be more worthwhile than trying to bag another convention center, arena, or theme park.
A MULTIFORM PROPOSAL
For a while now I've been brainstorming a suggestion for rebuilding the JFX into a multiform corridor that could (1) uncover the Jones Falls and transform it into a sunken recreational canal lined with a promenade/bikeway (an improved and extended Jones Falls Trail) that connected Druid Hill Park to the Inner Harbor, (2) offer a transit line, and (3) offer a tree-lined boulevard with a retail/residential “street wall.” This new corridor could connect downtown/midtown Baltimore to its outer neighborhoods and encourage revitalization to spread outwards. 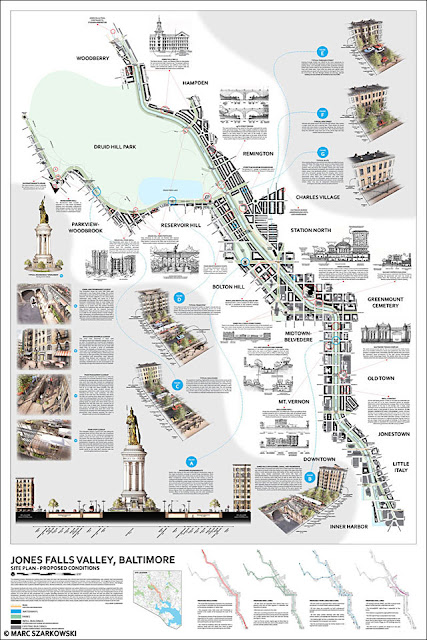 PDF version
This proposal is just an offering of ideas. I know Baltimore has more pressing concerns to deal with – addressing the “Big Three” issues (property taxes, crime, and schools) and repairing decrepitating water lines, for example. Nevertheless, I don't think these issues obviate ideas for Baltimore's future. 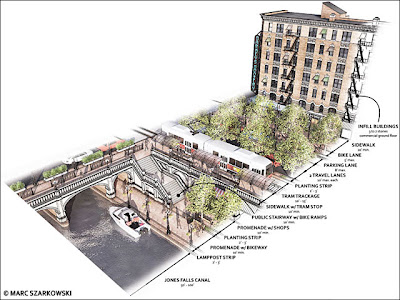 A MILIEU OF ACTIVITIES
The JFX could transition into a boulevard in Woodberry/Hampden and run along the canal all the way to the Inner Harbor. The illustration above suggests how the boulevard could be laid out so vehicular traffic wouldn't repel pedestrians and bicyclists. The boulevard would be separated from a bike lane and sidewalk by a parking lane and shade trees. The sunken promenade/bikeway would pass underneath the streets and connect to them via stairways and ramps. Retail alcoves could be built into the embankment to attract people - these alcoves could serve as stalls for the farmer's market: 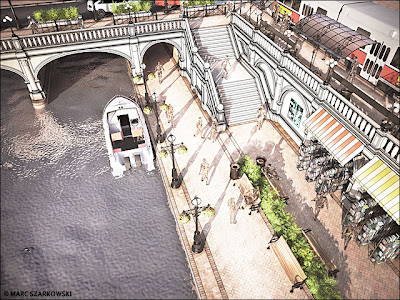 The canal could also be used as a transit corridor for an urban transit network that would supplement the existing (and hopefully expanded someday) regional metro.* I suggested having short trams or articulated buses run on the network instead of using cumbersome light rail trains.
*Why bother when B'more already has a bus system, right? One virtue of the local transit network would be its placement in dedicated medians (see below) so cars wouldn't delay transit vehicles (and vice versa). The system could essentially be a Quickbus upgrade – think how much quicker they'd be if they had their own lanes! In addition to folding in the Quickbuses, the system could also replace/merge many of the existing conventional bus lines, the Charm City Circulator, the Light Rail, and the Charles Street Trolley streetcar. 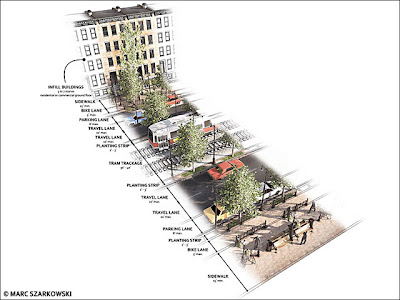 REAL BOULEVARDS
Many of the avenues feeding into the JFX - Druid Park Lake Drive, North Avenue, etc. - have devolved into highways. They've cut neighborhoods off from each other and exacerbated the devaluation of streetside rowhouses. I proposed rebuilding these avenues into a network of traditional boulevards that would accommodate several travel modes – cars, bikes, pedestrians, and transit (see above). I think this approach could make Baltimore's avenues more attractive to streetside residences, bicyclists, and pedestrians without compromising vehicle access or on-street parking. 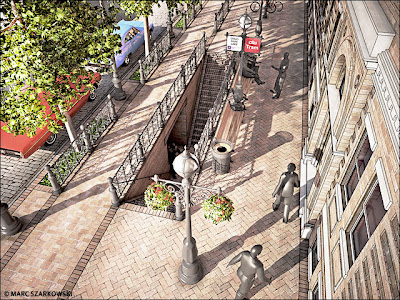 One example of a rebuilt avenue is my suggestion for redoing the mess of “drives” that slither along the southern rim of Druid Hill Park. By rebuilding this entire mess into a single boulevard (with sidewalks separated from travel lanes by bike lanes, shade trees, and parking lanes – see above), I think Reservoir Hill could reconnect to the park and improve quickly: 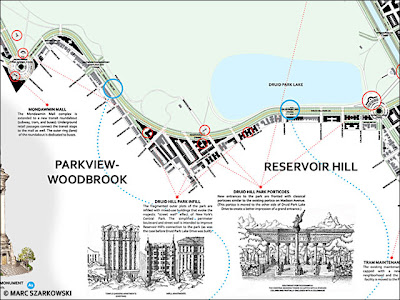 Druid Hill Park could also contain several new porticoes – especially at Mondawmin, where I suggested extending the mall to a new transit + metro roundabout that would contain a grand entrance to the park. The fragmented parts of the park below the new boulevard could be infilled with graceful mixed-used buildings that would serve as a convenient retail node. The infill could even form a “street wall” that would evoke a grand urban-to-rural transition: 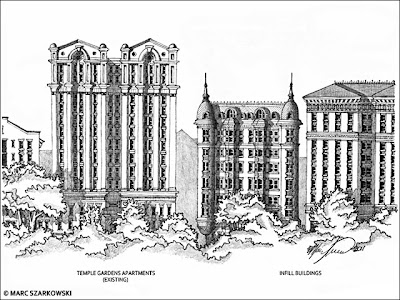 FINAL THOUGHTS
I hope this vision can spur a discussion on finding a multiform solution for the JFX. The city will have to spend a lot of money to shore up the expressway in the coming decades anyway – I think it could remove the barrier once and for all by building a multipurpose corridor that could provide more lasting benefits to the city of Baltimore.